Japan’s news agency business is said to have originated in 1662 in the early Edo (present-day Tokyo) era when wholesalers running express messengers between Edo and the Keihan region (Kyoto and Osaka) concluded news exchange contracts and exchanged news stories along with letter transportation. Bookstores in Edo, Kyoto and Osaka produced block print newspapers and sold them on the street.

Modern news agencies developed along with the spread of newspapers. Japan’s first vernacular newspaper was the “Kanpan Batahya Shinbun” published by the feudal government’s institute for the study of Western books in 1862. The first Japanese private newspaper was the “Kaigai Shimbun” published toward the end of the Tokugawa shogunate by Joseph Heco (Hamada Hikozo), a castaway from Banshu (present-day Hyogo Prefecture) who later became a naturalized American. The first Japanese-language daily, the “Yokohama Mainichi Shimbun,” was published in 1871 and later the “Tokyo Nichi Nichi Shimbun” (a precursor to the Tokyo Mainichi Shimbun) and other newspapers were published successively across Japan.

News agencies emerged in the early Meiji period (1868-1912) to provide these newspapers with stories, and the number of news agencies in Japan reached 200 in the 1880s. Many of them were small companies but socially credible news agencies in the Meiji period numbered just about 10. One of them was Jiji Tsushinsha, considered Japan’s first modern news agency. It was no relation to the present-day Jiji Press. Jiji Tsushinsha was established in 1888, funded by Mitsui & Co. founder Takashi Masuda. Sixty newspapers across the country subscribed to its articles, but Jiji Tsushinsha folded after three years due to financial difficulties.

After Nihon Shimbun Rengosha (later renamed Shimbun Rengosha or Rengo News Agency) in 1926, it and Nippon Dempo Tsushinsha competed vigorously. The latter’s initial report about the Mukden Incident (also known as the Manchurian Incident) on Sept. 18, 1931, hit the wire only four hours after it occurred and became a worldwide scoop.

As the two rival news agencies were engaged in cut-throat competition, their expenditures soared and led to conflicting reports. Pressures mounted inside the government and the newspaper industry to merge the two agencies, resulting in the establishment of Domei News Agency in January 1936. Nippon Dempo Tsushinsha handed over its news service business to Domei and inherited Domei’s advertising operations in June that year, leaving Domei the sole domestic news agency.

The number of employees at the time of Domei’s launch was 1,212. The Sino-Japanese War broke out, placing Japan on a war footing and leading Domei to expand the scope of its reporting activities. As of 1945, Domei had a Tokyo headquarters, six regional offices and 62 bureaus at home. Outside Japan, it had three regional offices and 23 bureaus in China, with its local headquarters in Nanjing, and seven regional offices and 23 bureaus in southern Asia, with local operations based in Singapore. Domei’s combined workforce totaled about 5,500. It was an incorporated foundation and its revenue mainly came from newspapers’ membership dues but it received subsidies from the government as well.

Domei transmitted news articles totaling about 100,000 Japanese letters and many photos to newspapers and others daily, produced newsreels for movie theaters and published newspapers in the Japanese-occupied southern theater. It also sent out by shortwave news about Japan and its opinions in English, French, Spanish and Chinese every day. Public broadcaster NHK was also engaged in foreign broadcasts but its entire aired news stories were produced by Domei. News transmitted abroad by Domei was Japan’s sole voice and the U.S.-led Allied forces regarded it with hostility as an agency in charge of the Japanese government’s foreign publicity.

During World War II, overseas communications contacts were blocked, except for those with Japan’s allies and neutral countries. But Domei monitored news agency stories and radio broadcasts of the Allied countries and picked up Reuters stories about the Soviet Union’s declaration of war against Japan.

After the war, Domei was ordered by the General Headquarters of Allied Powers to halt overseas transmissions of foreign-language broadcasts, and prepublication censorship began. Domei decided to dissolve itself at a board of directors meeting and was formally dissolved on Oct. 31, 1945. Its news agency operations were inherited by the incorporated foundation Kyodo News and Jiji Press Ltd. on Nov. 1. 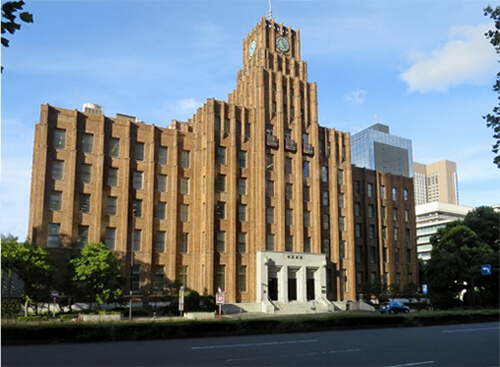 The Shisei Kaikan Building in which Domei News Agency was headquartered.